It’s that time of year, Autism Awareness Month. Where parents and service providers raise autistic voices in developing self autonomy over their own bodies and experiences and obviously not keeping autistics silent and making money for themselves/developing their own careers. So I thought I’d interview an amazing autistic activist.

Description: a young, white woman is smiling at the camera on a black background. Her dark hair is pulled back likely in a ponytail with some cascading onto her shoulder. She’s wearing square-ish glasses framing blue/gray eyes. She may be wearing a nude lipstick. She’s wearing a crimson dress shirt with what looks like a shiny leaf decal. A chain is visible on her neck and a low-cut shirt is visible at the V where her dress shirt buttons up.]

Note: this is a long interview. Very informative and I really enjoyed chatting with Whitney again, but autistics can get pretty chatty when we get on our specializations. Browse the questions that interest you. We cover a lot of interesting and important topics!

END_OF_DOCUMENT_TOKEN_TO_BE_REPLACED

Since only my friends came to see me present, I thought it would be prudent to post the presentation I worked hard on here. Citations can be asked for upon request.

This should not be taken as something peer reviewed that can be cited, but as an introductory conversation. While I’ve done research, this piece could have been researched better and could have also been generally written better.

Trans autistic people have been in the spotlight of the media over the past year. Much of this attention has not been positive.

In the recent BBC documentary, “Transgender Kids: Who Knows Best?” there is a section where Zucker discusses autistic trans youth. He says that autistic children wrongly convince themselves that they are trans due to fixating on their gender.

Quoted from the Daily Wire, Zucker said, “It is possible that kids who have a tendency to get obsessed or fixated on something may latch on to gender,” and that “Just because kids are saying something doesn’t necessarily mean you accept it, or that it’s true, or that it could be in the best interests of the child.”

For those who don’t know, Dr. Zucker is a psychologist and sexologist who formerly headed up the Gender Identity clinic at CAMH and is still a tenured professor at the University of Toronto. He is well-hated by the trans community for his aversion/cure-based techniques in treating gender non-conforming children and gatekeeping adult trans people’s access to hormones and surgery. In order to access hormones and surgery, some people had to lie and say that they were aiming to become heterosexual and conform to gender norms. And he used these results to publish his theories on what trans people are like. He’s still considered a leading expert on trans health in some circles.

END_OF_DOCUMENT_TOKEN_TO_BE_REPLACED

[Image description: On the left is Laverne Cox, a black trans woman actress/activist known for her role in Orange is the New Black and her vocal support of trans/black communities. On the right is all black with white text. It says, “It is revolutionary for any trans person to choose to be seen and visible in a world that tells us we should not exist. -Laverne Cox- AZ Quotes.

***Fag and hag are both considered terms that can be homophobic and sexist under certain circumstances. I’m using them here because they were ways that I and some of my communities joked about and used ironically/half seriously. I’m also using them to demonstrate the dynamic shift that I’ve experienced since transition. These aren’t terms to use freely.

Once upon a time, I was a bisexual/gay/queer/I’m confused boy-ish critter. I was pretty young and naive and believed in a politicized queer community. It took 7/8 years for me to go from that to jaded, frosty transfeminine critter. This journey was filled with oppression of varying sorts. I’m writing this to document for any questioning critters out there who internalized all sorts of grossness. I’m also writing this as a big fuck you to the psychiatric bullshit that categorized trans women (who were acknowledged as trans women) as either “homosexual transsexuals” and “autogynophiles”.

Homosexual Transsexuals were trans women who were exclusively into men prior to transition. Autogynophiles were trans women who were exclusively into women prior to transition. Notice the lack of bi/pansexuals, ace spectrum, and non-binary folks here. The ideal situation was the Homosexual Transsexual who’d become a “heterosexual woman” through the process and forget about life prior to transition. Autogynophiles were understood to be an extreme fetishist where the trans woman would get off to femininity (of both herself and other women). Both of these terms were coined by a non-trans sexologist, Ray Blanchard and demonstrate the violence of having white non-trans men theorizing about bodies that aren’t like their’s. Theorizing about people’s experiences and bodies should never be in the hands of those who don’t live it.

I’m still hella gay even though I’m transfeminine. I’m always going to be gay and it doesn’t matter what my gender identity. I’m too queer to function. My feminine gender is how I express my queerness, it does not make me straight.

END_OF_DOCUMENT_TOKEN_TO_BE_REPLACED

Description: a red circle with a horizontal white line cutting through it and the words, “access denied” flanking the line.]

I recently came back from a life-changing workshop with a bunch of trans women writers and I definitely learned a lot while there.

But not everything was sunshine and roses. Actually, I felt excluded, less valuable, less part of the group at times. Now reflecting on the whole experience, I realized a number of things were going on. I felt awkward being surrounded by people who I had just met and a number who already knew/were dating each other. They would split off and do their own things or hang around in their circles and I’ve always found it hard to enter conversations. My autism manifests in part as strong writing skills and obvious weaknesses in non-verbal communication. Aka, I’m good behind a computer screen, but I’m a socially awkward turtle in real life around strangers. With friends and in classrooms, I’m more an annoying chatterbox that probably talks too much.

I was also cut off from my support network because I didn’t have data in the US and didn’t have my crew to turn to. This resulted me into curling inside myself like a child in fetal position and I was just so upset that I lost the ability to speak for a bit. I can’t recall the last time I became so upset that I became non-verbal. None of this helped in making connections with the people around me. I didn’t have any friends to step in and help ease me into conversation with strangers.

I eventually got a little support from a couple people which I’m super grateful for. It definitely helped a lot. But the point of me writing is not about the people who were supportive. I’m writing this piece to draw attention to the production and creation of undesirable bodies.

END_OF_DOCUMENT_TOKEN_TO_BE_REPLACED

My video is a re-writing of a famous Chinese tale called the Legend of White Snake. The original story is more or less, about two snake spirits/demons named Green Snake and White Snake. White Snake falls in love with a human man named Xu Xian and eventually marries him. But shenanigans happen to try and divide their heterosexual union. Anyways. The story has numerous versions so I thought I could write my own. I felt connected to the potential queerness (femmeslash) of the story and felt it tied to my blood. END_OF_DOCUMENT_TOKEN_TO_BE_REPLACED 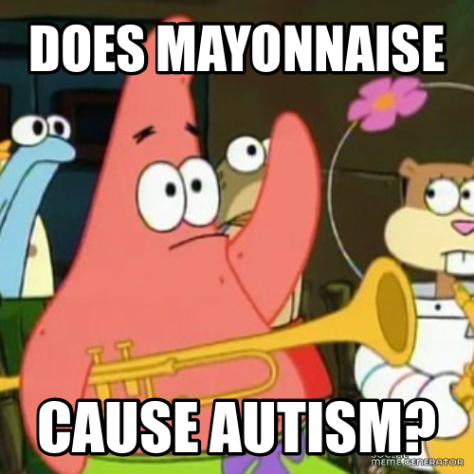 [Description: Patrick Star, an anthropomorphic star fish from the TV show Sponge Bob Square Pants, is raising his hand. The meme is captioned with the phrase, “Does mayonnaise cause autism?”]

This is purely an opinion piece and I’ve edited it too much to try  and not make it sound whiney.

I’m don’t claim to be an expert on Autism, it’s just what I’ve lived and am trying to figure out. I am writing this piece because I’m trying to articulate how I experience Autism and maybe raise consciousness on the lack of conversations around neurodiversity.

I’m using the phrase, “Aspie” to describe folks on the Autism spectrum because I don’t know what other word to use that is more succinct than, “people with Autism” or “Autistic people”. I’m aware that Aspergers has some differences from Autism as a whole. I’ll change my language when I find better language.

END_OF_DOCUMENT_TOKEN_TO_BE_REPLACED

The words of a disabled, fat trans girl of colour